Data classification is a supervised learning method that seeks to classify a datapoint based on its similarity to other, known datapoints that have been used to train the system. As with cluster analysis there are many methods, one of which, a decision tree, is shown here.

A decision tree classifies data by asking a series of questions to which the answer can only be yes or no. These can be numerical, for example is the value less than 4, etc., or categorical, for example is it red? Through a series of questions produced by the decision tree training algorithm the best categorical fit to the new data point is predicted. A simple example is shown below that attempts to classify an animal based on four animals it knows about.

The above example asks two questions based on three given attributes of an animal, i.e. how many legs is has, whether it barks or not, and whether it hops. It uses these to find the best set of questions to ask to identify the animal. Obviously this is a very simple example but it highlights the algorithmic requirements to produce a decision tree:

Given a set of data that has measured attributes and a known category:

The last point uses the term "categorised satisfactorily". It is not always a requirement to categorise every point in the training set correctly, and there is scope to allow for some error in categorisation. This is particularly relevant if the decision tree is to be pruned back to a given smaller size, i.e. depth of questions, in order to make it more usable. For example, a customer service operative will want to ask the minimum number of questions in order to diagnose a request - a list of 200 questions would not go down well with the caller or the operative.

For the algorithm to work, a measure of the information gained by asking each question is required. This is obtained by looking at each possible split between attribute points for each possible attribute and measuring how homogeneous it is. The split with the best homogeneity is chosen at each step.

The above expressions can now be used to define the information gain as a result of the split as $$ I_G(\mathbf{X},\mathbf{X_Y},\mathbf{X_N})=S(\mathbf{X})-S(\mathbf{X_Y},\mathbf{X_N}). $$ The higher the information gain, the better the split point is at producing more homogeneous regions. This measure is used in the algorithm to determine at each stage what the best split question is.
The interactive element below takes a set of categorised data that have two attributes based on the (x, y) positions of the point on a plane and produces a decision tree based on it. When started each optimal split is shown and the colours of the resulting regions chosen to represent the category with the maximum count in that region. So, the first split, for example only categorises data into purple and red items.

The decision tree resulting from the above data is shown below. 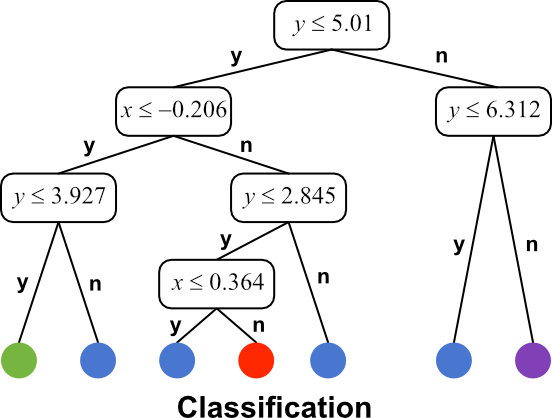 Why use a tree when you can have a forest?

The concept of a decision tree can be extended using multiple trees to produce a forest. The forest is produced by randomly generating decision trees from the training data subject to: