Forecasting is the art of using historical data to predict the future. All forecasting methods use an underlying mathemtaical model, which can range from a straight-line fit for simple cases through to a complex set of differential equations for less simple cases, e.g. predicting the weather. By way of example, consider the following time series data and ask a simple question: can we predict the next three values? 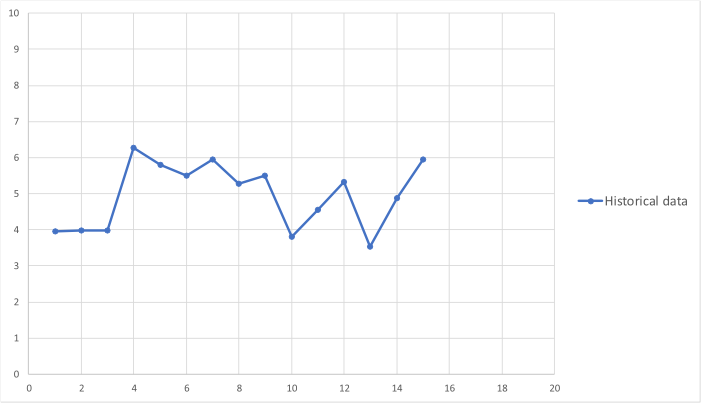 The most simple prediction method is to say the next three points are all equal to the last point in the data. This is unsatisfactory as the points clearly change through time and the last point might not be a good representative value.

An alternative method is to smooth the data and plot a moving average of the last \(N\) values and use the last average as the estimate \(N\). Moving averages are useful in determining trends in data, but require at least \(N\) points to get started, and count the importance of all data points equally. This may not be appropriate as the most recent data may be deemed to be of higher importance than older data. To allow for this a weighting can be applied so that the most recent points have a higher importance attached to them than points further back in time. One method of doing this is to use exponential smoothing. The advantage of exponential smoothing is that it can be started with a single point (however, generally several points are required for the method to work correctly) and the mathematics are simple to implement.

The graph below shows the result of using each of the three methods above to the data. 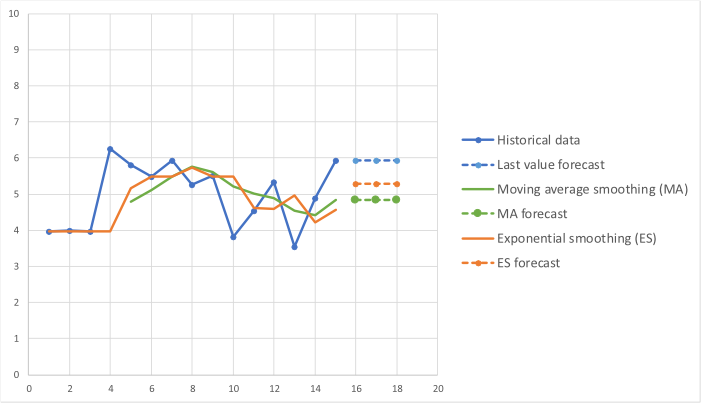 The above is a simple case but time series are not always so accommodating. In general, a time series of data may be complicated by:

An example of this is shown below, where the actual data are a sum of three components: a trend, a seasonal variation and random variations.

In the above, the components are additive. However, this is not always the case; sometimes they can be multiplicative. To determine which case applies depends on the data, and a series decomposition can be performed to evaluate whether additive or multiplicative is the most appropriate. The Python library statsmodels makes available the function seasonal_decompose to perform this (or it can be done manually in a spreadsheet). An example usage is shown below.

The equations above are relevant for an additive trend and seasonality. There are other possible combinations, as shown below, each with its own set of equations. The set below is known as the Pegels' classification scheme.

The interactive element below goes through the steps in constructing a Holt-Winters forecast model and uses it to predict values for the next six months.

The interactive above shows the Holt-Winters forecast gives a reasonable forecast, albeit a little on the low side compared with the actual data when it arrived (but the actual data does have random variations). However, the predictions are within the confidence interval (which gets wider, the further into the future the prediction is made), and the down-turn in the trend is correctly identified.