Back to Modelling & Simulation

In late 2019 a new strain of corona virus, COVID 19, emerged which became pandemic in 2020. Due to its infectious and potentially deadly nature, particularly among the old and those with underlying health issues, many governments implemented control strategies to minimise the impact of the outbreak. A key tool used to plan control approaches was the use of mathematical models. One possible model is the SIR model, so called because it compartmentalises the population into the S group - those that are Susecptible to the disease, the I group - those that have the disease and are Infectious, and the R group - those that have had the disease and are Removed from being considered as they can no longer catch or spread the disease (some call R the recovered group, however, many edpidemics have a non-zero mortaility rate and unfortunately not all recover; R must therefore count recovery and death), see graphic below.

In the above \(\alpha\) is a parameter that describes how infectious the disease is, while \(\beta\) is a parameter that describes how long people are infectious for after they have become infected (they are assumed to be infectious until they recover or they die). A key epidemiological measure, the basic reproduction number, \(R_0\), which essentially describes how many people an infected person will go on to infect, can be derived from these two parameters (see fold-out box below for more details). This value is important because it determines:

The SIR model assumes people are "well mixed" so that any susceptible person can be infected by any infected person, and it also assumes that there are no births (any deaths are grouped with recovered, but now immune people, in the R group). It uses differential equations to describe the evolution of three groups S, I and R, where S, I and R are the number of individuals in each of the three groups at any given instant, and N is the total population size, \(N = S + I + R \). The equations that describe how these values change with time are given below.
\begin{aligned} \frac{dS}{dt} &= -\alpha S \frac{I}{N} \\ \\ \frac{dI}{dt} &= \alpha S\frac{I}{N} - \beta I \\ \\ \frac{dR}{dt} &= \beta I \end{aligned} In the above \(\alpha \) is a parameter that describes how infectious the disease is, while \(\beta\) is a parameter that describes how long people are infectious for after they have become infected (they are assumed to be infectious until they recover or they die). Looking at the middle equation for the rate of change of infected individuals it is seen that there are two terms. The first term, \(\alpha S\frac{I}{N}\) states that the number of newly infected people is proportional to the number of susceptible people, S, multiplied by the probabilty of a susceptible person meeting an infected person, \(\frac{I}{N}\). As this represents the number of susceptible people becoming infected per day you should expect an equal number to be lost from the susceptible group, hence the first equation above. The second term in the middle equation states that the number of people being removed from the infectious group is proportional to the number of people infected (essentially if you double the number of infected people you should expect twice as many to get better on any given day). As this is the number of people removed from the infectious group you should expect an equal and opposite change in the number of people in the removed group, hence the third equation above.

For an outbreak to be an epidemic, the number of infections must initially be growing. This occurs when \(\frac{dI}{dt} > 0 \), which, in words, reads the rate of change of I with respect to time is positive, i.e. \(I\) is increasing. From the above this occurs when $$\alpha SI - \beta I>0 \Rightarrow \alpha S > \beta . $$ In the early stages of infection there are no people in the R group and only a very small fraction of the population are in the I group. This means that the fraction of the population in the S group is very close to 1. Substituting in to the above, $$\alpha > \beta \Rightarrow R_0 \equiv \frac{\alpha}{\beta} > 1 . $$ The value \(R_0\) is called the basic reproduction number and is a measure of how many people an infected person goes on to infect.

All the above is under the assumption that initially \(S \approx 1 \), \(I\) is small and \(R=0\). What if \(R > 0\), that is, what if there is already a significant number in the removed group? This could be through obtained immunity, or vaccination. Recall from the above, for an outbreak to be an epidemic, the number of infections must initially be growing. This occurs when \(\frac{dI}{dt} > 0 \), i.e. \(I\) is increasing. From the above this occurs when $$\alpha SI - \beta I>0 \Rightarrow \alpha S > \beta . $$ In the case where \(R > 0\), the approximation \(S \approx 1 \) is replaced by \(S \approx (1-R) \), so that \begin{aligned} \alpha (1-R) &> \beta \end{aligned} Dividing by \(\beta\) and recalling \(R_0 = \frac{\alpha}{\beta}\) \begin{aligned} R_0 (1-R) &> 1 \Rightarrow R < \frac{R_0-1}{R_0}, \end{aligned} for an epidemic to occur. This can be rearranged to ask what minimum value of R is required for an epidemic not to occur. This is simply given when $$ R \geqslant \frac{R_0-1}{R_0} $$ This value is the herd immunity threshold. It states what fraction of a population must be immune for an epidemic not to take off. For \(R_0 = 2.4\), the herd immunity threshold is about 58%. For measles, which has an \(R_0\) in the range of 12 - 18, the herd immunity threshold is about 92 - 94%.
The SIR model uses a set of simultaneous differential equations to model how the number of people in each of the S, I and R groups changes over time for a UK-sized poulation (see fold-out box above for details). These are solved and the results for the number of people in the infectious group are graphed in the interactive element below. This simulation lets the user introduce control measures, such as social isolation, which is intended to reduce the spread of the disease by reducing \(R_0\) during the period for which the action is in place. In this example the lower value of \(R_0\) allowed is 0.75 (this is an arbitrary limit for the sake of example). As this value is less than one it leads to an exponential drop in the number of people in the infectious I group. The time at which restrictions are imposed and lifted is controlled by the two sliders along the bottom. The key things to note are:

It is also possible to lock the duration of the control using the lock/unlock button on the top-left of the plot section. When this is applied the two sliders for imposing and lifting restrictions move together. Lock-down conditions can be damaging to mental health, and are damaging for the economy, so it is important that such actions are imposed for the minimum possible time. The question then is, if the lock-down is to be limited to, say, 3 months (space the start and end sliders 3 months apart and press the lock button), what is the best time to start the restrictions? Note, than when restrictions are lifted, any remaining infectious people in the population will begin the epidemic again - the so called second spike.

The model runs for a period of approximately 18 months (30 day months are assumed) with an initial infectious population equivalent to 1,000 people in 66.44 million. It is assumed that after 18 months a suitable vaccine will be available to prevent further spread.

*If nothing happens when you move the sliders for imposing/lifting actions then you have probably left the social distancing action slider at none.

Some key results from the above model are:


The timing of a fixed length intervention is important and a delay in introducing action can give a "better" result than an early intervention. However, you need to be careful as to how you define "better"! To illustrate this, the graph below plots how the peak fraction of the population in the infectious group over the 18 month epidemic changes with the day of introduction of a 90 day lock-down which reduces the \(R_0\) value from 2.4 to the given value, and below this the corresponding fraction of the population exposed. It is obvious that the best day to introduce the lock-down for keeping the peak down so that the health service is not overwhelmed (which may lead to more deaths) is not the same day as that which results in the lowest population exposure (which may also lead to more deaths). 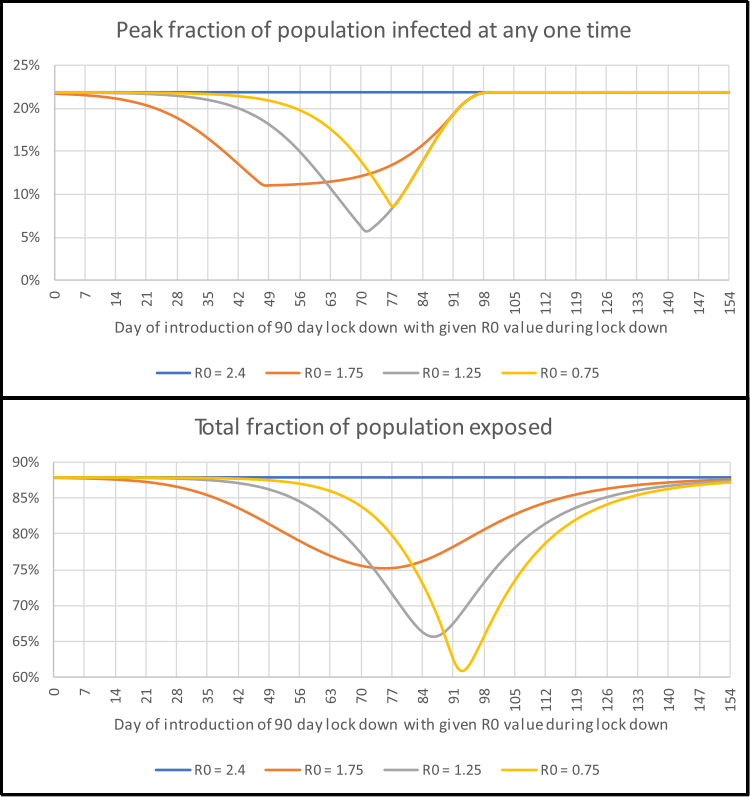 Is the SIR model using differential equations a good model?

The SIR model using differential equations can certainly be instructive in terms of giving a picture of the overall behaviour of an epidemic and can give valuable insights into the scale of effects under no intervention and imposed action scenarios. It does have limitations however in that it assumes the population is well mixed, and the probability that a susecptible person will meet an infected person is fixed based on the number of infected people in the population. This is a so-called point model as it does not use information for the geographical spread of the population and limitation is clear; if the majority of infection is in London, the probability of a susceptible person from Manchester meeting an infectious person from London is small unless those people have travelled between the two cities. To allow for this the differential equations can be modified to allow for diffusion of disease in the spatial domain as well as the time domain. Another approach, which has become more popular as computing power grows, is to use an agent-based method, where agents represent individuals or groups of individuals and are allowed to move and react to circumstances. This allows for the capture of complex behaviour such as travel and commuting routes, super-spreaders and those that fail to comply with social distancing restrictions.